You have just recorded vocals, you did not forget the anti-pop filter BUT
some harsh sounds still remain. sss
How to get rid of those annoying sibilances, harsh sound on “s” “ss” “sh” “ch” “z” ?

=> You can edit by hand if you have time, but it can be very tedioussss !

Or you can use a DE-ESSER, for automatically remove those annoying “s” in your vocal.
We have selected 3 FREE VST plugins you can use in Wavosaur or any audio editor or sequencer, that does the job ! let’s go : 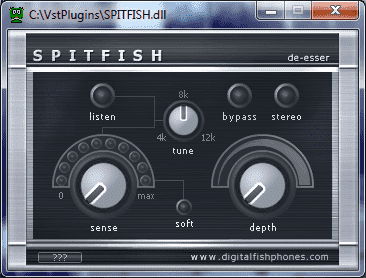 The gool old VST by DigitalFishPhones, it’s dead simple, and nothing prevents you from using two Spitfish in serie. It removes efficiently the “sss” sound.

This one comes with VST2 and VST3 version, as well as a 64 bit version!
Like spitfish, it has a stereo mode, and you can adjust the frequency for detecting the sibilant parts.
There are not so much freeware de-esser, this one is nice!

This one has been made with synthedit surely. We didn’t give so much test but it seems to do the job! It has a clean and simple interface.